Joe has decided he wants snails.  Not just ordinary, run of the mill, eating all my parsley snails, but ones you buy from a nice lady down south on www.snailfarm.org.uk.  She sells live snails for you to cook or, for around £300, a whole snail farm mini metropolis, so you can breed your own slow food army.  Now, I'm sure I bear some of the blame for this - every now and again I go on a wild goose chase to find someone who will sell me snails like you get in France - ready cleaned, back in their shells and smothered in garlic butter.  Yum.  But really, I've seen the snails in my garden.  I even live in the suburbs with only fractional traffic and people.  My snails shouldn't be too bad.  But I won't.  Sorry Joe - will have to wait for the next holiday.

On other news, this week we visited The Fleece in Addingham.  My parents dropped in to Yorkshire for a flying visit and we were looking for somewhere near Bolton Abbey for dinner - a quick twitter survey pointed us in the direction of the Fleece.

We arrived early evening on Sunday, expecting a quiet country pub serving good food.  What we got was a traditional coaching house, super busy, with great food.

I was always going to like the place because within minutes the chap behind the bar recognised a few Edinburgh accents.  The Fleece is the second outpost of a pub called the Sun Inn, near Dalkeith on the outskirts of Edinburgh.  The Sun Inn has been winning awards for a few years now and the team at the Fleece are hoping to emulate that success. I felt instantly at home.

We were shown down to our table in the cosy (and later a little too cosy!) dining room.  They offered an a la carte menu as well as the two course set menu for £14.95. 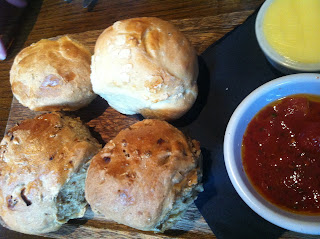 A little round of rolls with butter and a tomato salsa was first up.  To my mother's chagrin the rolls were not hot (!) but tasty all the same.  Not to worry, she had ordered the calves liver starter which made up for it with real flavour punch.  I could not have eaten more - calves liver is ridiculously rich - but for a starter on a rainy day it was good.  My dad went for the trusty prawn and crayfish cocktail, served in a slightly silly aluminium martini glass but stuffed full of crustaceans.  Joe went for the local Fettle salad of Yorkshire feta, both deep fried and plain with heirloom tomatoes, while I had the ham hock croquettes with a poached hen's egg.  Over all, everything was great - simple ingredients treated with respect.

The main course menu was also very good but we were a little predictable and picked the fishy dishes - fish pie for dad and I and mackerel on a Catalan stew (I think) for Joe and mum.  The fish pie was delicious - creamy, fishy, with a warming potato topping and peas on the side, while the mackerel was an unexpected Spanish surf and turf of Mediterranean vegetables with chorizo.  Both were well received, full of flavour and well cooked.  I could have done without the peas in the pie, given I also had them on the side, and my fish was perhaps sailing a little close to the firm side, but it was a truly enjoyable meal.
We were far too full to give the dessert menu any serious thought, although there was a little more deliberation over their range of liqueur coffees.  A latte with amaretto, glayva and topped with whipped cream anyone?  We settled for espressos and were delighted to be treated to some petit fours - what appeared to be a super gooey chocolate brownie and a nut crammed flap jack.

Overall, I loved it.  For a Sunday evening, the place was packed, and I don't think there was a single table free when we left.  I'd like to give a few more of their dishes a try, and they have some interesting pre-order group dishes including a crustacean plate.

We were also told that they are hoping to set up a cookery school in the future, which sounds fantastic.

If looking for somewhere to eat in the West Yorkshire moors, I'd thoroughly recommend The Fleece.  Simple produce, treated sympathetically but with a little spin of imagination, I will be back.  It's just a shame they don't have rooms or I'd probably still be there now.

Thank you for your review, I have shown it round on the ipad and everyone is really chuffed that you had a good time, Graham, the barman from Edinburgh thinks he remembers your party - lovely folk he said. Next time you are in let me know and I'll show you round our deli which we have opened next door!

Craig and all the team at The Fleece.

OUR REVIEWS OF STUFF