After driving back from the Wirral and a few drinks in Stew & Oyster, the last thing we wanted to do on Sunday night was cook.  Luckily for us, next door to Stew & Oyster is Nawaab Khan, self proclaimed "probably the best curry in Yorkshire".  Now, I'm not really in a position to judge whether that statement is accurate - I've eaten a lot of good (and some rubbish) curries whilst living in Leeds.  However, I will say that I did like this one. 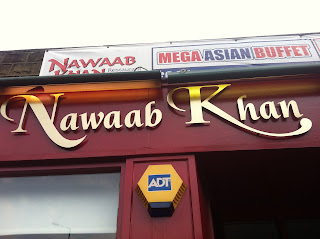 We opted for takeaway treats (Joe finally getting his way after what feels like months of asking), although on Sundays they do a "mega Asian buffet" for £10.95 per person.

Nawaab Khan is a family run restaurant serving Pakistani and Indian dishes.  We were relatively restrained in our ordering and could have gone for a lot more.  What I did note is that the menu doesn't give much of a spice indication - its fairly clear what is mild from the ingredients list, but what is spicy is less clear.

We went for poppadoms and a pickle tray as a little starter and the pickles were great.  There was a lovely little coriander pickle which I haven't tried before, and was really tasty.  The others, although more standard, were also very good.
For mains we went for Punjabi chicken, which is a Rajastani dish made with green chillies, cloves, cumin, black pepper and coriander, and was full of flavour and not too hot despite all the chillies. We also had lamb madras, which had sweet lamb in a lovely warming sauce full of flavour.  Both served up with pilau rice and a plain naan, it was a lovely dinner.  I was stuffed to the rafters but it was well worth it!  They are definitely giving the other Indian restaurants in the area a run for their money.

I I loved that post on top places to advertise, and I'm glad you linked to it again, so I could have both resources in one book mark

OUR REVIEWS OF STUFF